Witch Spring 3 is the third game in the Witch Spring series. It was developed by KiwiWalks under the direction of Suyoung Jang, the director of the previous two games.

Set on the continent of Derkarr, a neighboring continent to Vavelia (the setting of the previous two games), the game's events are concurrent to Pieberry and Luna's story. This story follows a deity named Eirudy, who lives in seclusion in the dangerous Misty Forest with only dolls to accompany her. Longing to make real friends, she one day meets a Human boy and her life completely changes...

A console version, Witch Spring 3 Re:Fine, will be released for Nintendo Switch on December 3, 2020.

The story of a witch who is chased after by warriors. Eirudy, the Marionette Witch.
A story-based RPG with no additional in-app payments.

The witch Lives in her house in the Misty Forest, hidden from the warriors.
At home, she crafts tools and magic, and trains herself.
Outside, she explores around to find magical ingredients and often encounters warriors.

The witch wakes her dolls and uses them to fight against the warriors.
The lonely witch wants to wake her dolls so she can have friends, but her dolls are silent.

Sometimes recognized and praised by humans,
but sometimes hurt; Eirudy, a lonely witch.

Lead Eirudy, the Marionette Witch in the path of light.

(Note: This isn't mentioned in the item description, but the Maegrik Egg can be consumed for +40 MAG.)

(Note: The Flaming Maegrik Dragon Scale it drops cannot be used for anything aside from forging a Maegrik Blade, or selling it for 3600 Gold.)

4. "How do I get the Legendary Weapon upgrades?"
Out of the three Legendary Weapons, only the Fine Blade Shubetha can be upgraded on any route. Both Armedak the Holy Sword and the Old Staff of Revgato require you to be on either the Light or True paths.

Fine Blade Shubetha → Za'rrel Shubetha: In Chapter 3, talk to the man in the Village of Lehert closest to the Lehert-reed entrance. He will give you the "Thieves in the Mine" optional quest. After completing the quest, he will reward you with Rare Metal. With the Rare Metal in your inventory, and with the Fine Blade Shubetha equipped, visit Za'rrel the Weaponmaker in the Weaponmaker's House. He will offer to upgrade the sword, so let him. This will give you the Za'rrel Shubetha.

Old Staff of Revgato → Staff of Revgato: After completing the events in the Temple of Marii and the Spring of Revgato - Root, Eirudy will be told to visit the Spring of Truth in Misty Forest. (It's the same spring that you get the Misty Spring Water from.) When Eirudy enters the vision, the Staff of Revgato will be floating behind her. Approach it to get the upgrade; if you don't, the staff will remain the Old Staff.

Armedak the Holy Sword: In the Temple of Marii, go into the hidden room. (You will see the entrance on the far left of the map. Tap on the entrance and Eirudy will automatically move to it.) By standing on the platform in the hidden room, you will undergo Marii's Trial of Patience. As long as you have more than a total of 996 HP + MP, you can clear the Trial. After withstanding it, Armedak will learn Ecarr Vertel as its weapon skill. (Eirudy will also learn the spell Ecarr Vertel regardless of whether she has Armedak or not.)

5. How do I get all 21 acquired info?
Simply put, you can't. There was an oversight where the info section for Inventory (before Additional Equipment's) is impossible to acquire. (Editor's note: If there is a way to acquire it, please let me know in the comments!)

Due to the game's wide popularity, online stores carrying merchandise for the game were opened up for Korea, Japan, and China.

Items sold in the store were:

After running out of stock, the shops have been temporarily closed.

* Tracks 4-18 are listed incorrectly on the CD cover. Track 4 is listed as Silent Doll, but is actually the track listed after it, Mysterious Cave. The following tracks follow suit up until Track 18, which is the actual track for Silent Doll. For the purposes of clearing up confusion, the above list has them in their proper order.

Notable changes from the in-game soundtrack: "The Witch and the Warriors" is much shorter in-game, looping after the first 30 seconds of the full CD version.

Along with food, other merchandise such as acrylic stand figures, artbooks, character pins, and full-body artwork panels were sold. A promotional video for the series played in the cafe along with background music from the OSTs.

Witch Spring 3 was the subject of two large controversies among the Korean playerbase relating to the game's illustrator, Jiseon Hong (snow_is). It resulted in a large and sudden dip in the game's domestic popularity, to the point where many speculated that Kiwi Walks would collapse. The company's reputation has not fully recovered as of the release of Witch Spring 4, but it has stayed afloat through the support of dedicated Korean and overseas fans.

The effects of the controversies have been rather long-lasting: the Korean versions of Witch Spring 1 and Witch Spring 2 were review-bombed, and Witch Spring 4 has not met the same success of its predecessor. (The unrelated region-lock on Vietnam, which the series previously did well in, likely also contributed.) Ironically, attempts to review-bomb WS3 were unsuccessful: as the first unified, global release, it retained its relatively high rating through overseas players, though it proportionally has a larger number of 1-star reviews compared to the overseas versions of WS1 and WS2, as well as WS4.

Witch Spring 3 Re:Fine is replacing all of Hong's illustrations with new versions, illustrated in the unified style established in WS4. 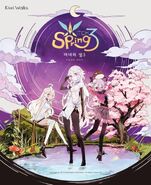 A promotional image released on January 24, 2018 to announce the post-game update
Add a photo to this gallery

Retrieved from "https://witch-spring.fandom.com/wiki/Witch_Spring_3?oldid=8251"
Community content is available under CC-BY-SA unless otherwise noted.